The first couple of times the boys used too much force and the glass was pushed over, or the egg went flying across the yard as they hit the toilet roll as well. This is why we did it outside. Amazingly the egg lasted the 10 times that this experiment was tried. Some have actually taken it further and used 3,4 and even 5 eggs/toilet rolls and glasses. We didn’t, as we didn’t have that many eggs at the time.This amazing egg experiment in based on Isaac Newton’s Law of Motion (also known as the Law of Inertia).“Every object in a state of rest or uniform motion in a straight line tends to remain in that state of motion unless an external force is applied to it.”

Basically objects keep doing what they are doing, whether it be rest or motion, until something else exerts force onto it.

Place water in the glass until it is about 3/4 full.
Place the pie plate on top of the glass and then the toilet roll and the egg.
(Check out the pictures below)
Then you push/smack the pie plate horizontally out of the way.

The egg should plop into the water. 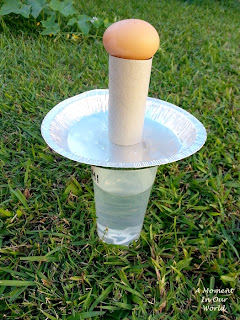 The pie plate is remaining at rest until you force it out of the way. 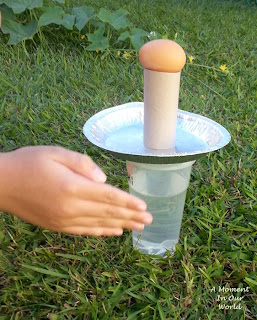 The egg remains at rest until gravity pulls it down, in a straight line. 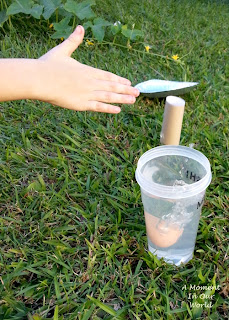 The end result for B. 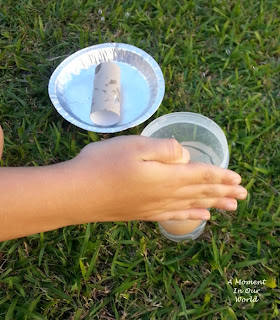 The end result for R.