Today we left Port Hedland, heading for Karijini National Park. As you can’t book into Dales Campground at Karijini National Park, we stopped in at a free camp called Blakeys Spot, where we had phone reception, to check the availability for the next couple of nights. We were told there were plenty of spots, so we headed off.

Karijini National Park is the second largest National Park in Western Australia, covering a massive 627,422 hectares. Little did we know, it is also home to blue asbestso, but it is only bad for you if you inhale its dust, apparently.

Then we stopped in at Bea Bea Creek Rest Area to check out the flowers. We haven’t seen flowers for weeks now, so it was a nice change.

We also passed so many road trains with 4 carriages and they were all a dark red colour. This would have to be the most road trains we have seen in a short stretch ever!

Then it was off to Karijini National Park. As we got closer, the scenery started to change. Lots of mountain ranges were coming into view.

Driving into the National Park, the colour of the road stood out. The side we were on, going into the Park, was normal. The other side, coming out, was covered in red dust. I have to say, I am looking forward to seeing green grass again!

Finally we were there! We were in site 114 in the Warlu Loop. It was a pretty big site, which was good and close to the drop toilets, but the price to stay in this National Park is almost triple what we paid for the National Parks in the Northern Territory!

After we had set up the van, we went to have a look at the lookouts.  First, it was to the Circular Pool Lookout.

Pronounce that name if you can: Circular Pool – Walhibindamunha

Then it was off to Fortescue Falls Lookout.

We went back to the van for an early night, as we now knew we had lots of walking to do the next day.

We were up early ready for a big day of walking. Well not really, it was a cold morning, so everyone found it a little hard to get out of bed. We haven’t had a cool morning like this for since arriving in Western Australia.

After a little motivating, we arrived at the Circular Pool Lookout again.

Then we headed down the track to the Three Ways Lookout before heading on the Circular Pool walk.

The Circular Pool walk is a grade 4 track about 800m long. It involves a steep descent (apparently around 380 steps) at the start before a rocky track along the gorge floor to reach the pool. It is said this walk will take around 2 hours as you do need to take your time over the rocky trail, especially over the slippery, wet rocks.

This pool is fed by an underground spring and it was awesome to see and hear the trickle of water seeping from the gorge walls. The water in the pool was extremely cold, so we didn’t have a swim here, a dip of the fingers was enough.

Once arriving at the bottom of the descent, there were two options. Go left to Circular Pool or go right along the Dales Gorge walk to Fortescue Falls and Fern Pool. We decided to go to Circular Pool first as it was a shorter track.

Instead of following little coloured triangles, today we had yellow and white circles!

Trying to find the little yellow and white circles proved a little harder than we thought. The track was not really marked out that well.

The last part of the track was through some big rocks.

Finally we were there! It was such a spectacular sight!

We had a little rest before it was time to head back. 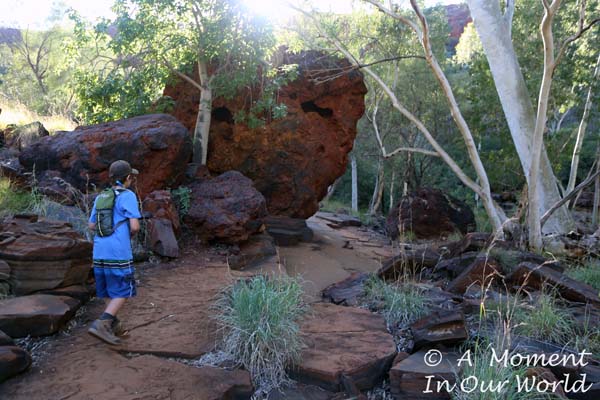 Once arriving back at the bottom of the cliff, we headed in the opposite direction to Circular Pool, along the Dales Gorge walk to Fortescue Falls.

This is another grade 4 walking trail and is 3 km long. The estimated time for this walk is 3 hours.

The scenery was really nice, with quite a few water crossings and quite a bit of wall hugging, but over it was a good walk.

Can you see the walking trail behind hubby? 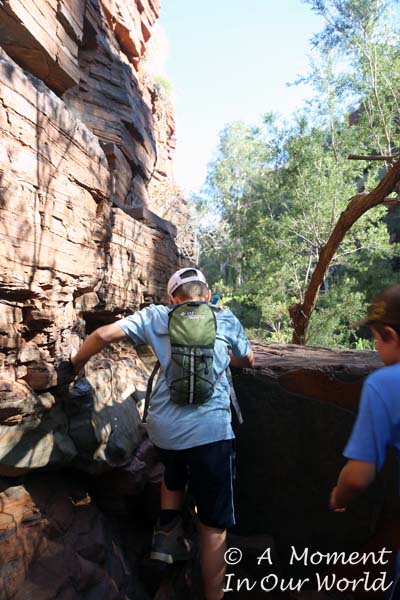 Then we had to climb through a small crack in the rocks. Hubby decided it was easier to go over the rock, but he has longer legs than us three.

Finally we arrived at Fortescue Falls. You can swim here, but we found the algae covered rocks were quite slippery for the boys, so we headed up and onto Fern’s Pool.

Climbing over the steep waterfall was hard work.

Looking back at Fortescue Falls while having a rest break!

It was a short 300m walk from Fortescue Falls to Fern Pool. Here the water was still cool, but the boys were able to have a little swim. There was a ladder to help you into the pool which was surrounded by little fishes that liked to nibble at your toes as you hop in and out of the water.

This pool was quite deep, with even hubby unable to reach the bottom. It would have been a good idea to bring the pool noodles, though carrying them on the walking track may have proved a little difficult at times.

After a refreshing dip, we headed back down Dales Gorge and back to the van, exhausted.

We had a great day walking through the Dales Gorge and seeing all the wonderful waterfalls and having a refreshing swim in Fern Pool. Now it is time for an early night, as we are off again tomorrow.