After spending a couple of nights in Carnarvon Gorge, we packed up and headed to Emerald. Only minutes into this trip, we realized our cameras on the car and caravan were not working. We contacted the place that wired them in and found that we were able to have them fixed under warranty in Rockhampton, so that was where we headed.

We arrived in Rocky late that night and used the next day to catch up on washing and stocking up on food. While in here, we thought it would be a good time to get the springs and shocks in the car done as it was sagging a little when the caravan was attached.

The boys really enjoyed this stop, spending time with Grandma and Papa.

We left Grandma and Papa’s in Rockhampton and headed for Emerald. We stayed at the Emerald Botanical Gardens free camp for the night. This free camp was extremely full by the time we arrived, but we were lucky enough to have another traveller offer us some space really close to him. The one thing we did not think about when we pulled in was the fact it was next to a railroad track. It wasn’t until a train came past in the evening and gave us a little fright that we worked it out. At least only two trains came past, that one and one at around 6am the next morning. 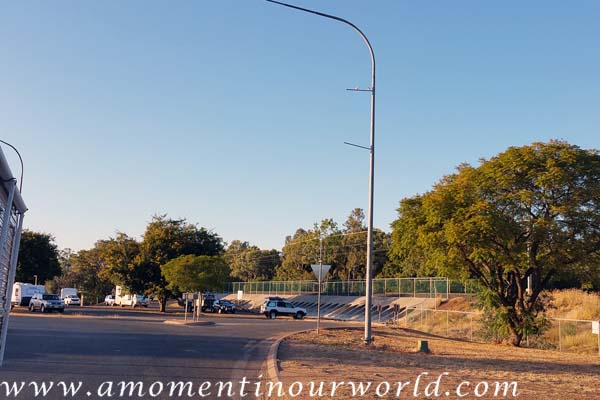 This photo was taken as we were going around the roundabout, leaving the free camp.