I found these fairy eggs/dragon eggs on ebay here and thought they would be great for the boys. They are 100% non-hazardous to the eyes and skin and not supposed to break. Ours did break, especially when you stood on them, though you’re not supposed to do that.

They do bounce all over the place so it is probably best to play with them on a sunny day outside, not a rainy day inside. When you purchase them they are small (about the size of very small beads), and you need to add water to them. It takes about 6 hours, or overnight, and then they are ready to play. They are soft and colourful and the boys had fun just feeling them and letting them fall through their fingers.
They also tried to separate them into colours, but gave up after a while as there was too many. They did spend a large amount of time putting them all into a 3L milk container. They kept dropping them and had to chase them around the house and this is when some where stepped on and broke. Overall they are really fun to play with and you can do lots of things with them. You just have to make sure they are not eaten. 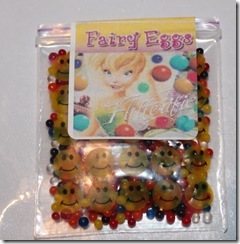 In the packet – We had 3 packets that we used all at once. 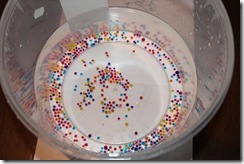 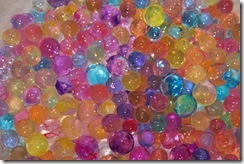 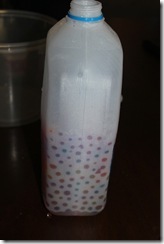 After they were all put into the milk container.
They half filled a 3L container.
If you leave them overnight, they do shrink again as they lose their water. Try putting them in water again and they should grow.