These can be found under many names like Fairies in a Jar and Glow in the Dark Jars.

We made these last night for the boys.

There are 2 ways that I know of making them:

1. Cut up glow sticks in a jar and shake the insides out, add glitter then the lid and shake.

2. Paint the inside of a jar with glow in the dark paint and add glitter and shake.

We did number 1. I cut 2 orange, 2 yellow and 2 green glow sticks in half and shook out the insides into a clear container. (I used an old peanut butter jar as it is clear and plastic, so it wouldn’t break if they dropped it.) Then  I added some silver glitter, put the lid on and shook. As the glow sticks only last 6 hours, so does this, but that was long enough for the boys to go around and turn off every light in the house and have a little play before bed. They fell asleep watching it. 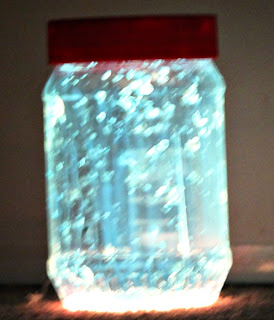 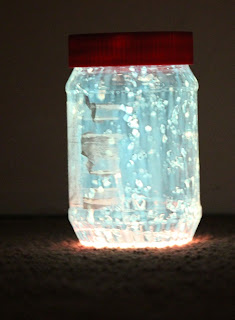 Here are some links to others

Fairies in a Jar

Glow in the Dark Paint + Jars